As I predicted in my video on the new divorce laws coming into force next week, the President of the High Court's Family Division has issued (just yesterday) guidance on how the courts should approach an application by one party for an order that the other party should pay their costs of proceedings. In fact, the guidance covers not only proceedings for divorce but proceedings for a dissolution of a civil partnership or for separation in marriage and civil partnership where mirror reforms will also come into force on 06 April 2022.

The guidance has a special eye on proceedings that are uncontested and where, because of the legal reforms, the court will no longer be considering the conduct of either party towards the other during their relationship. It makes clear, however, that the conduct of the party being asked to pay the costs of the other party in connection with the actual proceedings, rather than the relationship, may be relevant. This will be particularly so if, for example, the other party has attempted to evade service of court documentation and increased the costs as a result. Raising spurious or unreasonable arguments in proceedings will also be taken into account and could lead to a costs order.

This guidance in no way affects current proceedings or those which are started between now and 06 April 2022. This means, as I have been suggesting, that bringing proceedings under the current laws may well make it more likely that the blameless party will score on costs than under the new laws.

All is explained in my video which you can access by clicking on the video image in one of the posts below.

The Divorce, Dissolution and Separation Act 2022 WILL be fully in force on 06 April 2022. It's official. Thank the commencement regulations which have now been made - SI 2022/283.

Bring proceedings now or wait until 06 April 2022. How will the new laws work? For painless answers to these and other questions, click on my free video and settle down for twenty minutes......with a drink. 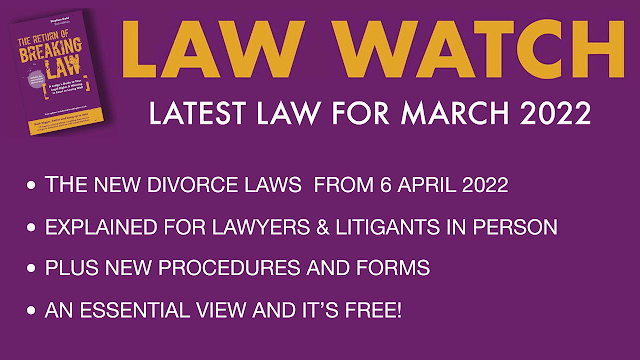 It is all due to be happening on 06 April 2022. That's when the new divorce laws will come into force. In my free to view video, I explain how they will work and whether anyone after divorce or civil partnership dissolution should bring proceedings under the current law before 06 April or wait for the new laws to arrive. Account is taken of all the relevant legislation as well as the amended practice directions.

If you are after collecting a few bob without having to strain yourself, you will know all about the Mastercard claim brought by Walter Merricks in the Competition Appeal Tribunal. If you don't, take a look at https://www.breakinglaw.co.uk/search/label/MasterCard%20claim

Where are we with this claim? Yesterday 09 March 2022 on the latest preliminary skirmish, the Competition Appeal Tribunal ruled that where someone who had the potential to collect compensation as at 06 September 2016 has since died, their claim will live on through the representative of their estate. This will add in an estimated three million extra claims. The Tribunal also gave permission for interest on compensation to be sought at the higher rate of 5% above base rate which raises the £14 billion being sought on behalf of UK consumers by up to £2.7 billion.

The case will move to a further hearing at the end of July 2022 when it is expected that a timetable for a trial will be set. A bit early to apply for tickets for the front row stalls.

The Supreme Court has now spoken in the matter of flexible tenancies (see my previous post here at https://www.breakinglaw.co.uk/search/label/flexible%20tenancies) and I warn you - it's a bit technical!  It has disagreed with the decisions reached by the lower courts.

The Supreme Court also ruled that where a flexible tenancy agreement contained a break clause and no fault was being alleged against the tenant, then, provided the conditions for its exercise were satisfied, the landlord could take steps to exercise it and obtain possession before the end of the fixed term  This would be appropriate, for example, where possession was required so that the let property could be redeveloped.

Without a break clause (where no tenant fault) or forfeiture clause (tenant fault), the landlord looking to oust their flexible tenant will be stymied.

Try and stay in your job until 06 April 2022. If you fired on or after that date, the ceiling for the compensation an employment tribunal can award you for an unfair dismissal is increased by a handsome 4.9%. This is in line with the rise in the retail prices index between September 2020 and September 2021.

The same level of increase is applied across the board for the various types of employment complaints that can be made but  none of the increases are retrospective. They apply to the employer's misdeeds which are taken to have arisen after 5 April 2022.

For these hikes, you can kiss (or kick, if you are an employer) the Employment Rights (Increase of Limits) Order 2022 (SI 2022/182) which, for example, also sees what is deemed to be one week's pay - and this limit is used for the calculation of redundancy payments and the basic and additional award for unfair dismissal - rises from £544 to £571. The maximum compensatory award for unfair dismissal goes up by £4,385 to £93,878.

All this applies to England, Wales and Scotland.