THE COMPLETE NEW LAW OF THE WEEK IN 59 SECONDS: Free Video

One minute is a long time to hear about the law and look at me, I know. So I have cut down my latest video to 59 seconds. Domestic abuse cross-examination. Revised civil court forms. Joint divorces. And taking in temporary workers during strikes. I have covered them all. It's fast. It's painless. You have no excuses for ignoring. 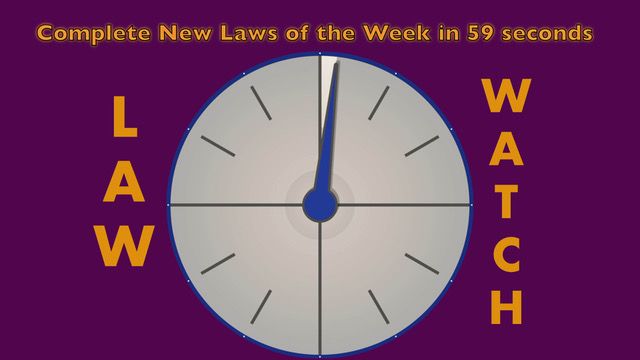 "I put it to you that you are a scheming liar. You tried to stab me with your nail scissors and have been conducting a secret affair with the postman since we got back from honeymoon."

From today 21 July 2022, domestic abusers will never have had it so bad. The Domestic Abuse Act 2021 sections 65 and 66 are brought into force in relation to court proceedings started on or after today (see SI 2022/840). No longer will the unrepresented abuser have licence to agitate, if not terrify, the person they have allegedly abused by putting questions to them in person. Instead, in the majority of such cases involving abuse allegations, the court will appoint an independent lawyer to conduct the cross-examination.

In family proceedings, where a party has been cautioned for, charged with or convicted of a specified offence - you name it and the offence is probably specified in a 14 page list of them - that person will be prohibited from personally conducting the cross-examination. And for good measure, the party making the abuse allegation is similarly prohibited so a vice-versa situation. The same prohibitions will apply to civil cases unless there has only been a charge of a specified offence.

In both family and civil cases, where there has been a protective injunction made - for example, a non-molestation order - following a hearing which was notified in advance to the party injuncted - neither unrepresented party may cross-examine the other.

There is automatic prohibition in these scenarios. Otherwise, the court has a wide discretion to prohibit cress-examination in person when this would be likely to affect the quality of a witness's evidence or cause significant distress to a party to the case or a witness.