Ron Kray's Brain: What Became Of It 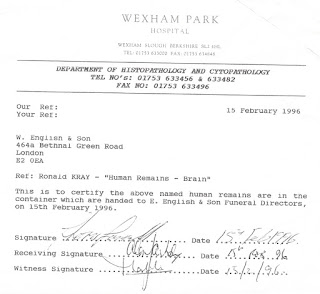 What's all this about, then? I used to be solicitor to the Kray Twins. When Ron Kray died from a heart attack in March 1995, the pathologist removed his brain. Given the cause of death, I was perplexed by that action but within a couple of months I began serving as a full-time judge and so was unable to personally pursue any investigation as to why this was done and what had become of the brain. But in my book Breaking Law I described the steps I had taken as I approached retirement as a judge towards discovering the truth - never too late! - and promised to update readers in my blog. So here goes.

I have established that the brain was released to the funeral directors E English & Son by Wexham Park Hospital at which the pathologist (now retired) was based 11 months after it had been removed. It was in  a casket which was then buried in Ron's grave. That's the receipt for the brain which you see above. But where had it been during those 11 months? In his post mortem report the pathologist stated that he had "retained the brain for further examination by Neuro pathologist."

Former MP Harry Cohen tabled two questions of the Home Office - for what reason was Ron's brain not buried with his body and what consents were obtained? This appears to have led to a flurry of activity including the brain's release. On 1 March 1996 the Home Office wrote to the then coroner setting out his understanding that the brain had been removed for medical research and not to establish the cause of death. In his reply on 4 March 1996 the then East Berkshire coroner insisted that the brain had been sent away because Ron had had a mental condition and not for research. "What would the family have said had the Deceased had a tumour on the brain which had not been spotted?" he rhetorically asked. The then coroner understood that the brain was not originally buried  because it was "still being studied by a neuropathologist." He had not given the pathologist express consent for the brain removal. He regarded the pathologist as having implied consent to do this. The pathologist was a skilled man and he was always happy to leave it to him to remove organs or tissue which needed specialist examination.  In short, he was asserting that there had been no legislative requirement to consult with Ron's relatives before removal as research did not come into the equation. He acknowledged that the family had not been notified of the brain removal. He understood that the brain had by then been "returned" to Wexham Park Hospital and collected by the funeral directors.`

Home Office Minister Tom Sackville answered Mr Cohen on 6 March 1996 in these terms -
"I understand that at the time of Ronald Kray's funeral the brain was not buried with the body since it was still subject to an investigation to establish the cause of death. I am informed that the necessary consents were obtained from the coroner for East Berkshire."

Finally, Mr Cohen asked for a list of each of the locations in which Ron's brain was stored before being returned to the body. That was an easy one as the Home office had been told that the brain had gone from Wexham Park Hospital to the neuropathologist who was at the John Radcliffe Hospital, Oxford and then back to Wexham Park Hospital. This was the reply -
"Arrangements for the care of the material are a matter for the pathologists involved."

The coroner had informed me in April 1995 that the inquest which he had already held into Ron's death had not been notified to Ron's family. It had taken place in his office and he had heard oral evidence from a police constable. He was satisfied that Ron could be "signed up" as a routine case of someone who dies naturally by reason of heart problems and indeed he gave a verdict of death by natural causes.

There does not appear to have been any good reason for removing the brain if not for research purposes and for that there was no consultation with relatives. And another matter.  Although the pathologist maintains that the brain was sent to the John Radcliffe, the NHS Trust responsible for that hospital say to me that "the Trust did not receive the brain at any point." It maintains that it received only brain samples including blocks and histological slides but not the whole organ and that it received a referral from Wexham Park to provide a post-mortem neuropathological opinion on Ron in.....March 1996 which was after the brain had been returned. The pathologist accepts that he took "25 blocks." If, as claimed, the brain did not reach the John Radcliffe, where was it between removal and return in the casket?

I would not want any organs removed from my body unless I had donated them, it was really necessary for diagnostic reasons or I had consented during lifetime for the purpose of research. Nor would you. That's why I have been at pains to find out what happened in Ron's case and why.

But I haven't finished! What happened about the testing of Ron's brain samples at the John Radcliffe? I have sought  disclosure of all written reports from the Trust under the Freedom of Information Act 2000. Disclosure has been refused as being exempt on the ground of confidentiality. And so I have since complained to the Information Commissioner. In a decision just issued the Commissioner has ruled against me on the ground that a duty of confidentiality was owed by the John Radcliffe to Wexham Park. There was no finding that such a duty was owed to Ron. I had argued that no duty could have been owed to him in respect of information created after his death and the Commissioner acknowledged the "obvious complexities" surrounding this issue.

I have decided not to appeal against the Commissioner's decision. This is because I am satisfied that there was no testing of the brain samples before March 1996 and I believe that the samples tested did not reveal anything abnormal: in particular, they did not reveal any pathological explanation for Ron's mental condition.

For more of my dealings with the Krays, take a look at Breaking Law.