Three complaints to the Financial Ombudsman Service in less than eight weeks. Was that greedy or the action of a mad person? Neither. It was the action of yours truly and in the course of getting financial institutions and businesses which come under the Ombudsman's jurisdiction to deliver a fair and efficient service. How did I get on?

BUPA
My Bupa policy was due for renewal. They failed to send me renewal documentation but proceeded to take the renewal premium by debiting my credit card account. The first I know of this was when I looked at my credit card statement. Following Bupa's failure to respond to three emails about the premium taken, I did give renewal instructions on different terms as to the excess and with one month's free cover. I maintain that the free cover was part of the negotiated premium  to keep me as a customer and was not intended to contain any compensatory element for  what had happened. Bupa then failed to refund the £782.03 difference between the premium taken and the lower negotiated premium.
On internal complaint, Bupa accepted it was wrong to have taken the premium without the renewal notice but maintained that the one free month dealt with that. It could not find my emails.
The Ombudsman's investigator agreed with Bupa on the one free month. As to the e-mails - sent directly to the person to I had spoken when the wrongful debit had been discovered and soon afterwards - Bupa informed the Ombudsman that he "has now left the business and so they would never be picked up as it (sic) was going to a personal email address". Bupa does not like email and generally insists on contact by telephone.
The investigator's recommendation was £200 compensation together with the return of the £782.03 which both Bupa and myself accepted.

PARAGON BANK
I applied to Paragon for a cash ISA and they asked me for evidence of identity. Fair enough. I could have been anyone like an ex-judge or the author of Breaking Law and you have to watch folk like that. I sent it promptly and they acknowledged it and then said they had not received it. I sent fresh identification which crossed with them returning the original identification they had not received! The account was subsequently opened but later than it should have been which resulted in a loss of interest to me as the intended investment money was lying idle in my current account.
On internal complaint, Paragon rejected it and contended that it had been incorrect in telling me that it had received the original identification. No compensation was offered.
An Ombudsman adjudicator upheld my complaint and concluded Paragon had not acted fairly. She recommended compensation of £100 to reflect loss of interest, distress and inconvenience. We both accepted the recommendation.

MARKS & SPENCER FINANCIAL SERVICES
My dispute this time involves a widespread practice among ISA providers when the investment is approaching maturity. It is to invite completion of an options form inviting reinvestment with that institution or withdrawal of funds but not the transfer of funds to another provider which is the investor's right. One company has frankly admitted to me that this is quite deliberate so as to encourage the investor to stick with that provider (more often than not these days, at an inferior rate of interest).
So it was with M&S with whom I had a maturing ISA. And so I quite deliberately wrote on the options form that I wished to transfer to Paragon (that name rings a bell!) from whom they would shortly be hearing. It came as a surprise to me, therefore, to receive this letter from M&S. 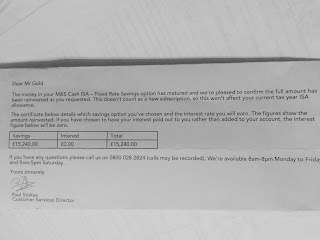 It told me that the full amount of my ISA had been reinvested "as you requested" and that under the option I had "chosen" I would receive interest at £0.0. A certificate at the bottom of the letter referred to an "advantage cash ISA option". There had been a booklet with the original options from which I did not read but which I accept explained that if the options form was not completed and returned or telephone instructions given by the maturity date then this highly appealing (nil interest) account would be opened. But I maintain the booklet was not material in the circumstances. What was material was that I was being told I had requested the reinvestment and that I had chosen the nil interest investment option. These representations, I maintained, were inaccurate. I had not requested the account and I had not chosen anything. Furthermore, I had returned the form. This computer generated letter should have been modified to fit the circumstances. It should  have said that as I had not exercised any of the options on the form, the default option of putting the funds in the nil interest account (pending transfer out) was being exercised. I wasted valuable time in going through correspondence and speaking to M&S - after waiting to speak to M&S - by telephone.
My internal complaint pursued as matter of principle  was rejected. My complaint to the Ombudsman was rejected by an adjudicator. I asked for it to go before an Ombudsman - this is the second and final stage of a complaint to the Ombudsman Service - and she has also just turned it down.She accepted I would not agree with her - she was right about that! - but found that the letter could not be read in isolation from the booklet and so did not find the letter misleading. I beg to differ.
It would be open to me to bring a county court claim but this would be highly disproportionate and I will not do so. Nevertheless, it is to be hoped that M&S will rephrase its letter sent out when the default option is being exercised  and that pressure will be placed on providers when seeking instructions on maturity to expressly draw attention to the transfer option alongside the other options and not bury away references to a transfer in an accompanying booklet.

If you have been, thank you for reading and may all your transfers out be happy and profitable.