An average sort of afternoon in Richmond, Surrey. Popped in to Waitrose. They had a pigeon with them but nobody could tell me precisely where it was. The fish, meat and cakes were covered over but, surprisingly, heads were uncovered. As you know, everyone is a partner at Waitrose so perhaps there were two pigeons.

Then on to M&S where, at first sight, the nectarines on display looked as though the store had its own bird on the premises. Take a look at this: in particular, the bottom right hand corner. Best before tomorrow. Best not eaten, I reckon. 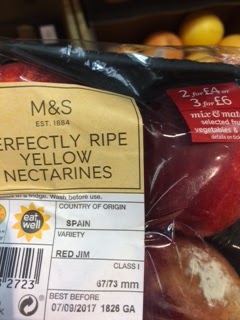 Could this in fact be the work of a pigeon? There were other packets in the same state and my conclusion is that a pigeon was not responsible and this was mould.

After leaving M&S I passed a stand at which subscriptions were being solicited for the RSPB. No pigeons on show but hedgehogs.